In its fourth generation as a family owned and operated yard, Snead Island Boat Works continues a long tradition of quality craftsmanship and service to yacht and commercial vessel owners on Florida's west coast.
FOUR GENERATIONS OF ALDERMANS AT THE HELM 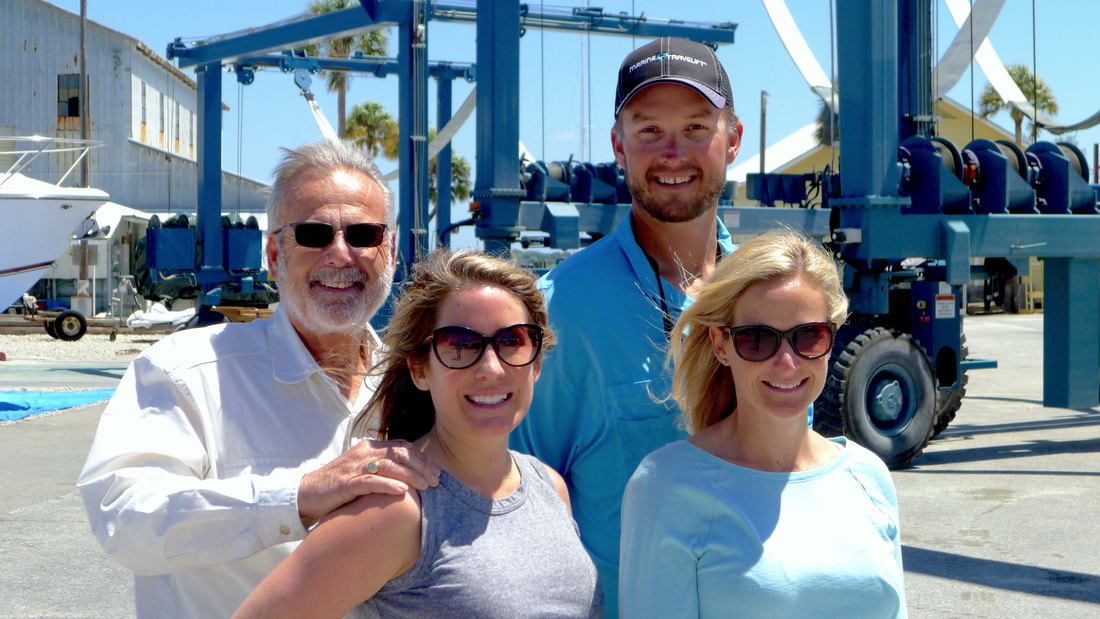 By the time Capt. Jim Alderman took over operations at Snead Island Boat Works in 1936, the location had long been in service as a boat yard. Easy access to Tampa Bay via the Manatee River, good depth and a natural basin supplied by a natural spring made it an ideal location to service, repair and build yachts and small commercial vessels.

Capt. Jim worked for the old "Pillsbury Ways" when E. E. Bishop purchased the yard, and began transforming it into a "modern shipyard," according to a local news story. The erection of what is now the main shop and several freshwater storage sheds marked a new start for the yard, with Capt. Jim at the helm. The new building became a local landmark--an artistic rendering of it now graces the walls of the aquarium at the South Florida Museum.
It was also a busy boat yard: the shop allowed for construction and service of larger vessels under cover, and the freshwater storage accommodated 50 boats. Some of the oldest boats in the yard date to this time, including "My Baby," built here in 1939, and "Islander," built in 1926 and re-fitted here as a tow boat, and which is still in service at the yard.
At mid-century, the boat yard was healthy and firmly established as Capt. Jim's son Jimmy began managing operations. The next twenty years saw big technological changes, as fiberglass hulls replaced the traditional wooden hulls that had been the bread-and-butter of the Boat Works for half a century. The changes included greater capacity and new technology. The basin was expanded in 1957 and the sheds were renovated to their current configuration. An Algonac boat hoist was added to the main shed in 1959, which is still in use. Snead Island Boat Works created a new haulout well and purchased its first Travelift in 1971 (It purchased it's ninth in 2017).
Snead Island Boat Works has been home to a number of famous guests over the years. The revolutionary sailing vessel Intrepid made Snead Island its summer home in 1982, while the Canadian America's Cup team used it for practice. You can can get a good view of the innovative rudder design in the rear view picture here. Other famous guests have included Thursday's Child, which in 1989, skippered by Warren Luhrs, eclipsed the record time from New York to San Francisco by 8 days and 12 hours. The 12-meter Heritage stopped by the Boat Works to be converted into an ocean racer, including an engine installation: here's an image of the yacht loaded on the truck for Chicago.
The Alderman family bought the yard in the 1970s, and Gary took over operations from his father, Jimmy. The yard has continued to evolve over the years, and has been home to private yachts, high-performance racing boats and world-famous vessels over the years, from the record-setting Thursday's Child, to the revolutionary Intrepid. ​​